Haven't tried Fitmania yet? Score a week on us!
Let us know your name an email and we'll send you the occasional email tip and coupon for a free week!
Are you ready to make a
significant change
in your life?
Start Here
Chris F 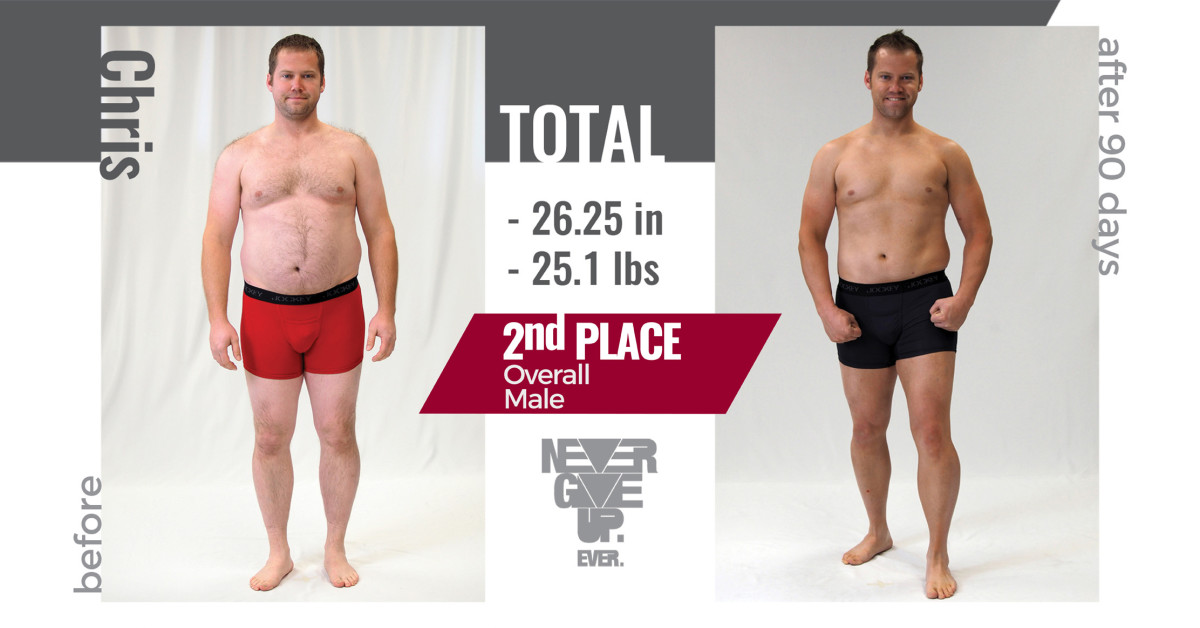 “Starting this challenge I decided the only way to do this correctly would be to not set temporary goals but really to set my goals for the whole year.”

I had an interesting conversation with one of my sisters about another person doing the challenge and she said I never knew there was that little Harvey underneath Harvey.  This conversation replayed in my mind for the next few weeks, and I had an epiphany, just as Harvey was revealing the man underneath the weight he has put on over the years, I want to reveal the man underneath me.  Over the years I have done what I wanted in the moment with little thought about the consequences it would have for me down the road, not that I have done anything bad.

For example my wife and I got pregnant last year after I had set some goals to get into better shape and I decided it was too much stress for my life, to worry about a new child in addition to making changes in my life. I stopped working out, but I also reverted back to all my bad eating habits, 100 plus ounces of soda a day and donuts or candy bars for breakfast, almost every night I was eating ice cream or something else equally bad for me.  When the New Year rolled around I decided I had enough and wanted to make the necessary changes to never get this way again.

However it wasn’t only my body that had experienced this problem it is also my mind and this has occurred much more slowly and over a larger period of time.  When I was in college I had an insatiable desire to learn and to grow, as a father and husband this gets harder because the energy I once devoted to school and growth goes to my wife and children.  Nothing means more to me then the five members of my family and they aren’t responsible for my mind losing energy and becoming “fat” what I have done is waste my time watching tv and playing games on my phone.  Doing what I could to disengage even just a little and the more I disengaged the easier it became.

The week before the challenge I had stated coming back to Fitmania and on day one I literally could not do one push up on my toes and could only do five in the one minute push up challenge and that was modifying to my knees.  A year previously I had been able to do fifty in a minute on my toes with no pain and this time it felt like I had a knife in my shoulder joint.  I remember doing run and touches and thinking I can’t run 100 feet how did I ever do a half marathon.  I had never been slower, weaker or fatter in my life and I didn’t even feel like myself anymore.

That last week before the challenge started I had to make up my mind how I was going to treat getting back into shape, I had done fitness challenges in the past and no matter how hard I tried I always slid backwards when I was done, I would gain weight and stop working out and revert to my bad habits, the few times I kicked them.  During previous challenges I still struggled with my first meal of the day, I still would get a soda or maybe a candy bar for breakfast several times a week, by the end of the challenge.  Also on Sundays I would eat half of a flourless chocolate cake to take the edge of my stress levels.  Starting this challenge I decided the only way to do this correctly would be to not set temporary goals but really to set my goals for the whole year, I decided what days I would eat desserts and what days I would take off from the gym and mostly I gave up convenience store food and drinks namely Dr Pepper.

I also set positive moving forward goals for myself, I planned my  meals instead of hoping they would show up, my wife and I spent hours every Saturday making the things we needed to eat correctly for life not just this challenge.  Once food was taken care of I had to decide how I would work out, I committed to six times a week, and promised myself if I missed or could make it that it wouldn’t undo my week I would hop back in the next day, with working out I decided to change the way I worked and work on becoming perfect in every exercise that I did and then worry about being fast. The last thing I decided I needed to do was something for personal growth, in keeping with working out I took the advanced training course, the second thing we did is turn off the TV for a week and do something different.  I haven’t felt better about me or what I do in a very long time I feel strong mentally and physically, and am excited to continue this journey and be fitter at the start of the next challenge then I am today.