Haven't tried Fitmania yet? Score a week on us!
Let us know your name an email and we'll send you the occasional email tip and coupon for a free week!
Are you ready to make a
significant change
in your life?
Start Here
Michelle 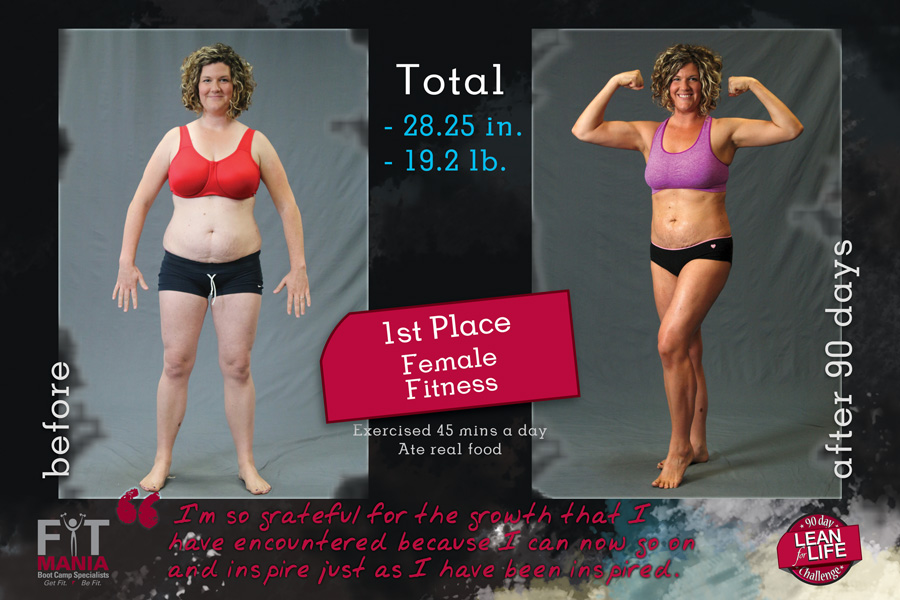 In my life, I’ve never had a lot of self esteem.  I’ve always felt less than.  I was always really good at trying to be the funny girl who’d make fun of her body issues.  It’s always easier to point out how big my “jugs” are or how big my double chin is to people and get a little chuckle rather than do anything about it. I’ve always been a negative thinker, a self doubter.  This has always been a part of me.   What it all comes down to is that I just haven’t ever had the confidence in myself.  As a young teenager I played different sports but I was never very good at any of them and part of the reason that is, is because I always had doubts and those doubts turned into me quitting.  I have always been a little intimidated about really trying.  Putting my whole heart into something was so much work and I have always been a little lazy.  Laziness and self-doubt don’t get much accomplished in this life.

So when a dear friend of mine introduced me to Fitmania I was a little scared.  In fact, I was so scared and had so much anxiety; I couldn’t sleep the night before.  She came and picked me up and I tried it out for a week.  It was hard.  So hard I wasn’t able to sit down without hurting or walk down the stairs without being in pain.  But what I loved and what kept me coming back was the positivity.  I feel like more than anything else, that has been life changing.  Our minds are so powerful and when we surround ourselves with people who think positively we become inspired.  When I first started boot camp I made little goals like, workout 4 times a week, try to hold a plank for 50 seconds without coming down.  In the beginning those things were so hard.  Staying up for 50 seconds in a plank was a joke.  But as I came more, and became a part of this family, I grew.  My body was stronger and slowly I could do things I hadn’t done before.  One of the most memorable moments this challenge was around week 9 or so.  We were to hold a 10 minute plank.  I knew it was coming up soon and I knew in my mind, I was NOT going to it.  As we started, I was strong but knew shortly the pain would come.  Around minute 3 it started to burn.  “Don’t come down! Which wolf are you going to feed? The good or the bad?” Our instructor would say.  So I stayed up.  Minute 7 I wanted to come down but then I heard our instructor cheering us on, “What you think expands!”  So I continued to stay up.  By minute 9, every muscle in my body was shaking with fatigue but I thought, “I’ve made it this far! Don’t come down!”  And as the timer counted down and reached 10 minutes and I was still holding a plank, I was so overcome with pride, joy and mere emotion in what I had just accomplished that it brought me to tears.  Never in my life would I have believed I could do something like that.  But I did.  I was being held at a higher standard and I didn’t want to disappoint anyone, including myself.  I’ve been given a gift that I wouldn’t have received had I not started this journey.  I love myself more!   I believe in myself!  This journey has taught me that I am stronger than I thought and I can do so much more than all my negative thoughts have ever tricked me into believing.  It’ll be a lifelong challenge to change how my mind automatically wants to think of the negative before the positive but I feel like I’ve learned some wonderful tools and proven to myself how to overcome those thoughts.  I want to teach my children that life is hard but our attitude can help change our outlook which can change our world.  I’m so grateful for the growth that I have encountered because I can now go on and inspire just as I have been inspired.